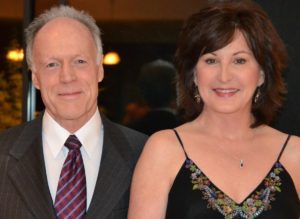 Since his childhood years in Pasadena, California, Russell Pyle showed a unique creative flair (Russell Pyle). From ages 9-14, he staged a carnival and circus show for all the kids in his neighborhood. Every year, it was the highlight of everyone’s summer.

Over time, Russell went on to become a daring and innovative theatrical set and lighting designer (Legacy). His award-winning work took him all over the world and fed his love of adventure, people and other cultures.

Russell was also a man of strong faith. Every year, he led mission teams and smuggled Bibles in to restricted countries. He was so fearless, it earned him the name “Indy,” short for Indiana Jones.

But as Russell tells it, his most challenging assignment proved to be winning the heart of the woman he loved. It became a daring quest, full of risks, setbacks and triumphs—the perfect adventure for a romantic hero like Russell. True to form, he pulled out all the stops and, ultimately, swept the lady of his dreams completely off her feet.

Marion’s early life was also shaped by the arts (Marion Pyle). With a father in the television business, she grew up in and around the entertainment industry surrounded by talented actors, producers and directors.

She launched her career writing and producing commercials, acting in theatre and independent films, and also singing in a popular rock band. She honed her acting craft in with some of Hollywood’s top coaches and after moving to Melbourne, Australia, worked  as an actor in theatre, television and film with international A-list actors. She also co-founded a successful drama studio that became a creative hub to many talented Aussie artists.

But God had more than just a career in mind for her. One summer, He invaded Marion’s life and she became an on-fire Christian. This led her to Bible college, after which God distinctly called her back to the U.S.

Arriving in Los Angeles, she was uncertain about what lay head. But God slowly refashioned her life with a steady hand through many initial ups and downs.

One day, He brought Russell into Marion’s life. At first, she did not believe they were a good match. But God did, and Russell did, and how things unfolded was so wildly romantic, their story became the inspiration for this entire Winning At Love series.