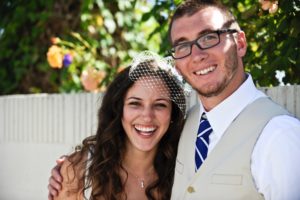 Growing up in in the small town of Portland, Texas, did not offer a high energy youngster like Trey Allen a lot of choices. His life revolved around football – the sport, as well as the fast lifestyle. With no discipline or spiritual influence in the home, Trey soon spiraled out of control and dropped out of high school in his sophomore year. Hitting rock bottom, he cried out to God. A local youth pastor led Trey to Christ and began discipling him. Trey’s gift of preaching soon became evident and he began touring with Christian worship bands and preaching all over the country. When he returned home, Biola University in California invited Trey to come for further Biblical training. It was there that he met a beautiful brunette named Erin. But as Trey soon discovered, it would take more than just his sparkling personality and charm to impress the woman who was not only his boss, but also the one destined to become the love of his life.

Erin was a true California girl. Relaxed and friendly, one would have ever guessed that her early home life had been marked by uncertainty from divorce, illness and the loss of her older brother in a motorcycle accident. Thanks to the the loving care of a pastor, Erin was shepherded from Junior High to her early college years. She grew spiritually strong, and transitioned gracefully to Biola University to study Psychology and the Bible. While working as Resident Assistant in the dorms, she met a spirited young freshman from Texas named Trey Allen. She soon learned that Trey was not like any of the others under her supervision, but rather a force to be reckoned with, in more ways than one.