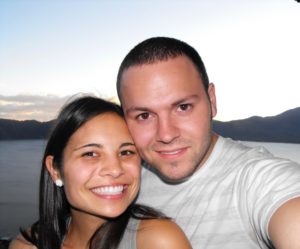 Trevor Miller’s early home life wasn’t always easy. With two divorces in the family, he moved frequently, and the dynamics between the siblings and step-siblings were often challenging. Fortunately, his involvement with Christian ministry, church friends and high school mentors brought him much-needed stability.

As a young adult, Trevor became an architecture student at Cal Poly San Luis Obispo. The week that Hurricane Katrina struck, he volunteered to help with relief efforts. He soon found out that the storm was not the only thing that turned things upside down: A beautiful girl named Ali was part of Trevor’s team.

The friendship got off to an awkward start, but Trevor was smitten. However, he soon learned that pursuing Ali would require a level of maturity and endurance he’d never anticipated. Yet these challenges only confirmed deep in his heart why she was exactly the right woman for him.

When Ali Miller was in second grade, she asked her father, “If there is no such thing as sin, why are there so many bad things in this world?” Being an agnostic, her father’s answer left her dissatisfied, so for the next few years Ali visited all her friends’ churches and temples of many faiths. Nothing transformed her heart until she heard and embraced the Gospel of Christ.

Her passion for God grew so strong that in 7th grade, Ali saved all her babysitting money, bought herself a Bible, and got involved in group studies, church retreats, and missions trips.

As a young adult, Ali then moved to Cal Poly in San Luis Obispo to study Child Development and Psychology. Her faith grew dramatically. When a young man named Trevor began asking her out and soon declared his love, Ali made an unusual request, a request she knew would not only test his character, but either make or break the relationship.