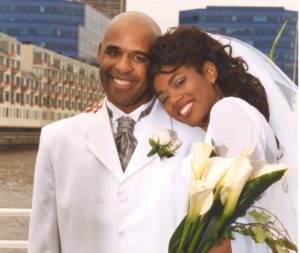 Marquis was born and raised in Washington State, and moved to Los Angeles after graduating college. When his roommate bought him a Bible and took him to church, Marquis got radically saved.

After praying for God to show him his life purpose, Marquis began memorizing entire books of the Bible. Before long, he launched a unique ministry called Acts of the Word and began performing the Scriptures all over the country, and as well as in parts of Europe.

Despite his success, Marquis longed for a life companion, and began praying to God for direction. Things got off to a bumpy start until one night, in the middle of a crowded room, Marquis suddenly received a supernatural answer to his prayer.  The message was clear, specific, but came wrapped in a question that left Marquis absolutely speechless.

Theresa grew up in New Jersey, the daughter of a pastor and the youngest of three children. She went to college in Indiana and graduated with a double major in Political Science and Communications.

After moving back to New Jersey, a girlfriend invited her to a night at the theatre. That evening, an actor named Marquis Laughlin would be performing the book of Revelation. Though exhausted from a busy schedule as a flight attendant, Theresa agreed to go, not knowing that sitting in that one seat in the middle of the theatre was about to radically alter the course of her life.