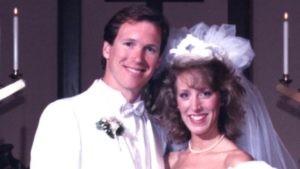 Growing up with a father in the US Air Force led Mark to live in five different countries and 12 cities before finally settling in Los Angeles.

An extrovert by nature, he became an actor, studied at the New York Academy of Dramatic Arts, and later honed his craft working summer stock, off Broadway, soap operas, and commercials. Mark then moved to Los Angeles to pursue work in the entertainment industry where he expanded from acting into directing and also co-founded a successful Christian theatre group.

One day at church, Mark felt inspired to sign up for short term missions. He hoped to be sent to Europe or Hawaii, but, instead, the Lord directed Mark to Guatemala, the very last place on his list. He grudgingly agreed, unaware that it would be there that God was about to give him one of the biggest blessings of his life, but not before it brought him, literally, to his knees.

Cindy grew up in Oregon with three older brothers. Home life was not always easy, but her faith had pulled her through and solidified her heart for a life in Christian ministry.

After high school, Cindy moved to Los Angeles to study at Life Pacific College. She became a Licensed Minister and got hired at Church on the Way.

While here, Cindy signed up for a short term missions trip and was assigned to go to Guatemala. She was thrilled at the prospect and blissfully unaware that God had spectacular answers to prayer waiting for her there, answers that were not just life changing and widely romantic, but also unforgettably funny.