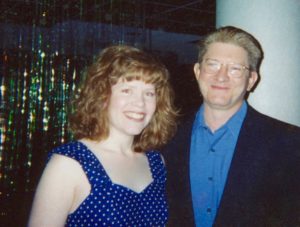 Key describes being happiest in his career when his three great loves converged: God, drama and music. Growing up in a Christian family, he graduated with a youth ministry degree, did church planting, and then fine-tuned his talents with graduate work in missions, theology, and mass communications. Any extra hours were dedicated to acting and theatre.

After graduation, Key secured stints as a writer and editor in Washington and Philadelphia. When he moved to Los Angeles, his sights expanded to not only include script consulting, but also, as it turns out, a pretty redhead named Cheri.

Romance quickly blossomed and Key began planning every detail of the perfect engagement. However, the day of the proposal something went so terribly wrong, Key thought he might have lost Cheri forever.

Cheri is a true California girl except for four years in Arizona studying graphics design and doing missions work in Mexico with Campus Crusade for Christ.

Cheri became a believer when she was nine years old, and just to be sure, kept answering altar calls again and again until a camp counselor assured her she did not need to keep doubting her salvation.

After graduating, Cheri returned to Los Angeles. Wanting to make new friends, she visited a singles group at a large local church. Sitting next to her was a young man named Key. She noticed his Bible was worn and had many passages underlined. Key, in turn, noticed that Cheri was a shapely redhead with a husky low voice.

Though they seemed meant for each other, at the last minute, Cheri discovered that Key was not the man she thought he was, and their future as a couple suddenly hung precariously by a thread.